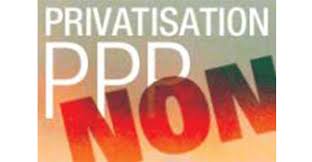 The MUHC was built in PPP mode, and… in corruption and abuse of public funds mode.

Barely 5 years after the opening of the New MUHC, all the facades of the Children’s must be redone. This is shameful in itself, but the real question is: WHO pays? The private consortium or our public funds?

The paved entrance in front of the hospital has also just been redone.  Imagine your paved entrance that has to be redone after 5 years…. Would you be happy?  At the MUHC who pays?  The citizens or the consortium?

In this picture we see the huge lot in front of the MUHC with a sculpture.  Underneath this huge space is the underground parking lot.  Since the opening of the MUHC, the roof of the parking lot has been leaking and to date no solution has been found despite incessant work.  We are told that the decision has been made to dig the whole thing out and even remove the artwork.  Is this the case?

Who will pay for this gigantic excavation? Who is going to pay to redo the parking lot?  The population or the private consortium?

Certainly the consortium has lawyers to argue that it is not “normal maintenance” to have to redo a façade, a pavement, a parking lot after 5 years, so will the P3 use this excuse to pass the bill on to the public purse?  The question arises but the answer is difficult to find because the contract is secret.

The issues are pressing and important.  The government needs money, he only offers “peanuts” to the guardian angelsof our health care system, but will he find, once again, millions to feed the P3 feast?

We have every reason to fear the answer to these questions because at the MUHC the consortium is doing everything it can to categorize even the smallest jobs as billable extras.  For example:

It’s not just the extras that cost a lot, there are all the legal battles that come with them: the MUHC against the PPP, the PPP against the MUHC, and there’s no end in sight.

The government has everything it takes to put an end to this sad festival of abuse of public funds.

Fraud and our civil code

We know that the contract was obtained with $22.5 millions of corruption money.

In our civil code, when a contract is obtained through acts of a criminal nature where the government has been deceived and abused, that contract can be declared void by the courts.

It is understandable that the Liberal government did not want to “rock the boat” in the courts, but the CAQ … Why don’t they start legal proceedings to have the P3 contract nullified and then recover the hospital’s property?