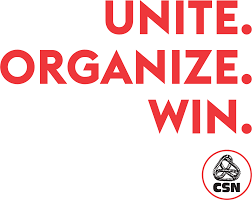 Over the past few days, close to 800 delegates from CSN public sector unions have learned about the comprehensive agreement in principle for the renewal of collective agreements. With the struggle continuing at the sectoral tables of the unions in government agencies, the global agreement concerns workers in health and social services and education, i.e. nearly 160,000 members of the CSN.

Meeting in sectorial negotiating bodies, the delegates made the assessment that the agreement in principle includes interesting gains both in terms of the working conditions negotiated at the sectorial tables and in terms of salaries and other matters negotiated at the central table. Consequently, they are committed to presenting it to all the members, in a general assembly, according to the deadlines set by the federations based on the realities of the different sectors.

“The impressive mobilization of the last few weeks, with strike action, the blockade of the Port of Montreal and the 24-hour vigil in front of the National Assembly, has enabled the CSN to reach an agreement that meets many of our demands. We have succeeded in reaching our initial objective, which was to significantly improve working and practice conditions and to improve the salaries of everyone, with particular attention to those who earn the least in the public services,” said Caroline Senneville, president of the CSN.

Ms. Senneville recalls that the CSN was the first organization to defend the need to further improve the wages of low-paid workers. “It was the CSN that imposed this issue in the negotiations. It was far from being a priority for the CAQ. We forced them to consider it by putting this demand forward in our consultation booklet in spring 2019. Our persistence in keeping this demand alive has resulted in the following today: wage increases of 7% to 10.4% over three years for those who earn the least. At the CSN, more than 75% of our members will get these increases, either because they are in the lower ranks (1 to 11) of the salary structure or because they are at the beginning of their career in ranks 12 to 28 (excluding the specific scales for college teachers, who will get specific bonuses). “For the upper echelons of these same ranks 12 to 28, the increases will be 6% over three years.

The CSN also considers that it has made interesting gains for skilled workers, by managing to extend the current bonus to various job titles and by solving several application problems. While until now, 70% of workers benefited from the premium, the new measures will ensure that more than 95% of them will now have access to it.

Several other advances have also been translated into real gains, including the employer’s contribution to group insurance, which will be improved and fully integrated into the collective agreements.

“Will this agreement solve all of the health care sector problems? Unfortunately, the answer is no. However, the negotiating committees and delegates of the CSN’s public sector unions believe that the progress made is significant and will serve as a springboard for the next round of negotiations, which is already fast approaching, since it will be a three-year collective agreement. Now it’s up to the 160,000 public sector workers of the CSN to decide,” concluded the CSN president.