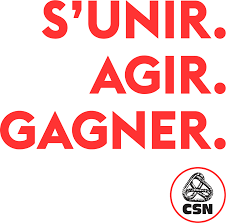 The leaders of the 6 labour organizations that represent nearly 300,000 “guardian angels” have been summoned by Treasury Board, not invited, summoned, like a school principal summons unruly students to be lectured or disciplined!

It’s been a year since the “guardian angels” have been on the firing line in the battle against COVID and it’s been ….

– one year that our collective agreements has expired;

– one year that we are being sent to the front lines without the N-95 masks that would have been so essential since day one to prevent aerosol contamination between colleagues and patients within our health care institutions;

– one year that the government is fighting against us to limit the wearing of N-95 masks, and the government has fought us all the way to the Labour Court.  The government did everything to deny the aerosol effect before the Tribunal.  Finally, on March 23, 2021, after a pitched battle, the Tribunal ordered the government to provide us with N-95.  We could have avoided a lot of contaminations in one year if we had been provided with N-95 masks.  At the MUHC alone, we had 951 employees infected at the COVID and a large number were contaminated at work!  In the province more that 35,000 workers were infected ! And to think that the government has the nerve to say it is satisfied with its management.  Nonsense !

–  one year that the government is a champion of hypocrisy by calling us guardian angels in front of the public while at the bargaining table it treats our elected officials and all our labour issues, working conditions and wages with total contempt.  The government’s position can be summed up as:

“if you don’t like your working conditions or your wages, go work elsewhere”.

This is the true face of “Papa Legault”!

A decree in preparation…?

By summoning the 6 union organizations, the government is preparing to put an end to the negotiations by twisting their arms or by decreeing our collective agreement.

Another decree cannot be tolerated.

Health care workers are dedicated and underpaid. Their salaries have not kept up with inflation since 2004 and successive “reforms” have worsened working conditions.

For decades, the trade unions have respected essential services in all negotiations.  This has never prevented the governments from decreeing or imposing impoverishment on us, especially on the small wage earners.

If the last 20 years are any indication, this Treasury Board summons signals that the government is preparing to end bargaining around June 24.

The 6 trade union organizations negotiated separately, without a common front, each one on its own, hoping that “their arguments“, “their situation” would merit “special” attention from the government.

One year later, the 6 organizations are faced with a government that has only one policy: to deny the value of the work of our guardian angels and to let the health sector deteriorate, to empty itself of its guardian angels.

The government has no qualms about this.  On the one hand it says it might have millions for a damn baseball stadium, it announces millions for the construction industry and almost every week it has millions for private companies and their “beautiful projects”.

It is only when faced with the salary demands of the guardian angels that he changes his tune completely, that suddenly the deficit and “austerity” become the number one priority.  For a year now the government has offered us nothing but 5 more years with salary increases below inflation.

It is true that in education and health, the majority of employees are women, so…

Not the same bad movie again…

We’ve been in the movie 3 times since the early 2000s. This time we have to change our tactics and tone. We have to make ourselves heard by the population.  This is the only way we can force the government to come out of its contempt and hear us.

We have about 10 weeks left before a decree to engage in a dialogue with the population and to be heard we will have to speak out in numbers, together, united and we will have to disrupt our cities our streets, the institutions of economic power, the bosses, the politicians, etc…

Our colleague Paul Ayotte had a fantastic idea, he proposes that we make a moral pact with the population that we put the government on notice to stop treating the guardian angels with contempt and that they must negotiate in good faith.

As the third wave of the pandemic begins, and despite our exhaustion, we are still at work, knowing that for a second summer in a row our vacations will be limited due to the pandemic!

The population has understood like never before that we are essential and that our work deserves a lot better than the contempt of the CAQ.

Let’s get out of the bad movie, let’s go out in the street, let’s make ourselves heard loud and clear, let’s create chaos in our cities, let’s address the population, let’s show that we deserve better than impoverishment.

We have a golden opportunity to start making ourselves heard in a constant and massive and united way.

On March 31, the 6 organizations called for demonstrations to denounce a whole year of negotiations with a government that has settled absolutely nothing.

Let’s make this March 31 the springboard to remobilize our members.

Let’s make this March 31 the first step of a renewed union unity.

Let’s take to the streets and push back this government that maintains the same rhetoric and the same policies of stifling the public sector as previous governments.

FOR THE PUBLIC SERVICE

FOR OUR WORKING CONDITIONS

at the corner of Sherbrooke and McGill streets

We demand a collective agreement that meets our commitment to the public.