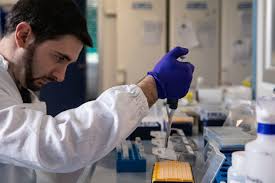 Where are the pharmaceutical companies?

At a time when we hear that all kinds of companies are starting to produce medical equipment and clothing for health care workers: Tesla and General Motors are going to make respirators, Bauer wants to produce visors, Tristan wants to produce jackets, La Chaufferie de Granby, a distillery is going to produce antibacterial soap and so on. And the pharmaceutical companies they… radio silence!

And yet it’s the Public Service’s turn to receive.  It’s been decades that our governments have been bending over backwards to support these private firms… with public money.  How come the support is never returned?

Pharmaceutical companies are doing research to find a cure or a vaccine that they will patent and make them rich.  Meanwhile, our health care system urgently needs massive screening, testing, testing massively to detect and isolate infected people as quickly as possible.

The current policy of testing when there are symptoms is INADEQUATE and INEFFECTIVE especially for health care workers: doctors, PAB’s, housekeepers, etc…

Why?  Because a person becomes contagious 24 hours before they’re detectable.  In a hospital or a CHLSD a person can come into contact with many colleagues and patients in 24 hours.

Even more seriously, some people can be contagious and have mild symptoms or even be asymptomatic for several days, which multiplies the risk of contagion even within health care institutions.

The result of the current protocol is jumping out at us right now. For example, at the CHSLD Ste-Dorothée in Laval, untested employees worked on several sites in Laval and on several floors and departments on each site.

When will we have a stable workforce that is tested every week?

Our public laboratories need reinforcements to set up a weekly testing protocol for all health care personnel.

We need these pharmaceutical companies, their workforce and their laboratories to test all health care personnel once a week. We need it right now!

And these companies are important.

Do not tell me that the companies are looking for a cure, a vaccine, and that they cannot collaborate in screening by lending part of their facilities.  They have a moral duty to do so.

For decades the Quebec government has been giving and giving back to the pharmaceutical industry in many ways,

3.         High drug pricing (only in the USA and Switzerland are drug prices higher than in our country).

Not only does the pharmaceutical industry live off our taxes, it also fails to deliver on its promises.  Since 1996 they are supposed to invest 10% of their sales revenues in research and development, but they have never respected this commitment.  In 2017 they have invested a meagre 4.7% in Research & Development.

The government tightens the screws on citizens to control the spread, the government imposes rules and penalizes offenders. All right, fine!

If pharmaceutical companies refuse to offer part of their facilities to assist in testing, the government must requisition these facilities, including laboratories and personnel.

In order to “flatten the curve” we need to change screening protocols, especially for health care workers, and we need to do something about it, now!